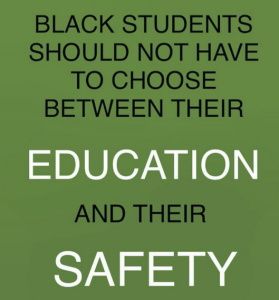 As the GOP debates went on a few nights past, there was another racist crime being committed at the University of Missouri. I watched my Twitter feed as students began to panic because some sick, racist psycho decided to threaten every Black student with death.

On a social media app, YikYak, an anonymous person(s) posted death threats. Kill any Black student on sight, is basically what this person said he would do. Where is the media? Where is security? While more 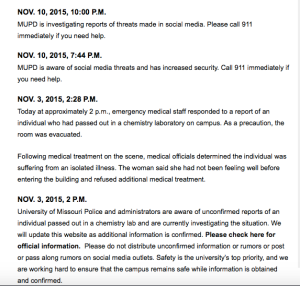 hate filled monsters chanted hate -pointlessly- into the night, students tweeted the location of these dangerous sites to others, asked for the cruelty to stop and were given the worst advice ever from the University of Missouri’s “security”. Their main security posted this, pretty much leaving students in a state of confusion without the security and safety they deserve. On the left is a screen shot of the information posted for students that night. The next post isn’t made until November 11th, at 6:00am when they have the main suspect in custody.

– Where is the media!? Yes, the debates were on but had this been a threat made by Blacks to whites this would have been breaking news.

Quickly, the situation was growing more intense, but the security was doing the very least they could do, it seemed to me. I watched tweets, videos and photos coming up in my feed, I spoke with friends as I could and felt more and more sick. The GOP debates were still raging on, where was the national attention? We all know had it been reversed it’d have stopped every channel! Where do these unwarranted, unfounded and flat out stupid feelings some whites seem to have towards Black people derive from? Why in hell was this not treated as seriously as it should have been?!

Mizzou football team has joined the fight to address racism on campus.

It began with Black graduate student Jonathan L. Butler, 25, who has gone on a hunger strike in his response in Wolfe’s reticence in addressing racial tension that escalated when a swastika scrawled in excrement was found on a dorm wall.

Butler said he is willing to die unless Wolfe leaves office, prompting the school’s chancellor R. Bowen Loftin to issue a statement voicing his concern for his health. With the Black football players adding their weight to the issue, the nation is finally paying attention.