I would never give up my guns; I live in a neighborhood which is too dangerous not to. I’ve never used it and never would unless I had to. Just because some of you don’t comprehend it, doesn’t mean you are right. Gun control wouldn’t stop killings in school, the school killing with the most kids and teachers murdered was in 1921 and it was a bomb he used, not a gun. In China a few years ago, a knife was used in an a school by some crazy person.

Guns don’t kill; it’s that people who don’t need guns get them and shouldn’t. The government (CIA & FBI) admits pushing guns into the Black community when J. Edgar Hover was the director. He was a horrible racist person, and you best believe his ‘sick, racist and hate filled dreams’ are still in motion.

Source: The shocking difference in how blacks and whites are killed by guns

This article is about suicide, unemployment, the media and mental health, mainly…but it also is about the media’s coverage -and lack of coverage, of a serious illness. I have also included resources below for those in need of someone to talk to…

First, however, I would like to make an apology and an explanation for a poorly and insensitive post I wrote a few days ago about a young banker whom has killed himself. When I came across an article written in the RT regarding the 14th banker dead due to suicide, (and you can read the post that sparked my previous post here)

I went into a frenzy of rage for many reasons. It took my wonderful father in law, however, to make me rethink what I wrote (you can check out his wonderful blog by clicking HERE).

In my last rant, I didn’t even make the point I wanted to make. I simply read the article and went into a blind rage -and I directed it in the wrong direction, carelessly, and worse, thoughtlessly. I truly and sincerely apologize for that. In this post, I would like to correct what I wrote, but also write what I was trying to say, now that I am level headed and have thought about what I said. END_OF_DOCUMENT_TOKEN_TO_BE_REPLACED

No matter what your beliefs, bullying is not acceptable. This is a powerful plea from a father, please read and share.

The Abuse Expose' with Secret Angel 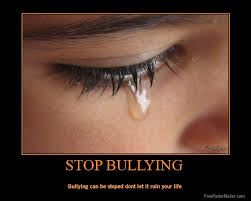 This was a response that I received from my posting yesterday, entitled  Bullying… Not so Cute., and I felt that I should share with my readers. This plea is from a father named Jeff…

Jeff says:
“My son is an A student in advanced education in NC. He has been bullied to the point where he came home crying and didn’t want to go back to school. Of course my heart sunk; my son whom loves to go to school, came home and walked into the room, head hung low and his face covered.This is not how my son is, so I knew something was wrong. I asked him “son what’s the matter” he lowered his head even further and covered his face completely and began to cry. He was so humiliated and hurt,he could barely tell me what was wrong. My son whom I have been raising alone…

…And the forgotten. That was me, searching for answers, looking for other women who felt as I was feeling during pregnancy. I searched the internet for hours, not knowing the terms to look for, being faced with ridiculous and religious hate posts instead discouraged me from seeking out other women who had been in (or still was) in the place I was in.

I was then pregnant for the first time, and didn’t fully come to terms with this reality until a few weeks in when I began to feel the changes and realize me and my husband’s life would change forever. Not only this, but it strengthened my flashbacks and other mental issues. I continued to search for anyone to talk to about everything; the situation I was in.

But depression during pregnancy still was something the majority of people only spoke of as being “antenatal depression” and I could find very little at the time I needed it most on mental health, pregnancy and abortion. I wanted my pregnancy done, or my life over.

So, the reason I am going to write on depression, mental health and abortion is because that was a huge part of my story, and I hope to offer women a place on my site to see they are not alone nor are they evil for how they feel.

In my opinion, why a woman has an abortion is her own, and that’s all there is to it. If it is right for you for, reason does not matter. It doesn’t mean you are any more right or wrong for having an abortion. The above photo/quote is the truth about abortion for it is no one’s business but your own, and abortion is a medical procedure; nothing more.

But the reason I am speaking about myself at the moment is again, because END_OF_DOCUMENT_TOKEN_TO_BE_REPLACED

RAPISTS SHOULD BE IN PRISON -Not Heroes or Non-Violent Offenders. – Especially not Heroes.

Anonymous is more of a hero than the government’s of the world will ever be. I respect them and what they do much more than the government, for the government has failed and continues to fail against crimes against women. There are many reasons I feel there is no hope in humanity, and this is one. Why are people not outraged that the high school football players who raped, photographed, joked…
END_OF_DOCUMENT_TOKEN_TO_BE_REPLACED

I normally am not impressed by cops, there was the cop in California who saved countless people from jumping to their death off of the Golden Gate Bridge– to me he’s a cop worthy of respect- at least, from what I know. Check out that link, it is actually very inspiring.

And though I know police in England are not saints and do far more than their share of abuse; I must say if American cops responded like cops in London did today, this would be a far safer country. (Police are the biggest gang we have here in America, if you ask me. That’s sad and scary. Anyhow-)

Americans, can you imagine a cop here doing this? Because I cannot. If cops responded like the cops in London did today, hell, even if they only treated the unarmed like this… but an armed person!?
END_OF_DOCUMENT_TOKEN_TO_BE_REPLACED

It is very depressing for me to hear that the sickening Governor Rick Perry, TX, (R) has signed such an anti-woman, anti-choice, anti-medical and anti-health care bill. I have no doubt women will fight, I have no doubt the women of Texas will; but I also believe we as a people need to inform ourselves.
END_OF_DOCUMENT_TOKEN_TO_BE_REPLACED

Sadly, I have to head out so I am going to copy and paste this tragic article which involves a cop tormenting and bullying a teenager, driving him to suicide… Their people “skills” are lacking and beyond disgustingly insane. I do not have the link to the original article, if you know it, please do link it in the comments, when I return later today I will search for it as I did not write the following but it is definitely news everyone needs to know about.

We’ve had numerous cases of people; from the computer hero Aaron Swartz who saw suicide as his only way out due to the governments plan to punish him for a length of time not only unreasonable but also unjust. There are many cases that deal with this and this is the latest (that I know of). It is nothing but bullying and abusing power, people can say they didn’t have to take their lives but sometimes, suicide seems the only way out and when you’re in that frame of mind you can’t think straight. It feels hopeless. And sometimes, it sadly is.

Nineteen-year-old Pullman, Washington, resident Andrew Cain took his own life on Saturday. Now his sister, Alise Smith, is asking for an apology from the local police department who allegedly cyber-bullied the young man just days beore his death.
END_OF_DOCUMENT_TOKEN_TO_BE_REPLACED

So, let’s be honest; this isn’t about health care, this is about closing a great deal of abortion clinics and following the majority of anti’s religious beliefs, not on the healthcare of women nor on the rights of women.

Last night, Texas state Governor Rick Perry (R), a disgrace to any progression in women’s rights I believe, forced through SB5 which if passed by the House will close all but five abortion clinics in Texas. How is the closing of health clinics going to help better the health of women? Since he has proposed dozens (literally) of anti-choice bills and been denied them all, he forced SB5 to go through at a time and in a manner under which new procedural rules apply, leaving democrats; i.e., those blocking, at a major disadvantage.

Another pro-choice, aka, pro-life post from yours truly. Today I said one of many reasons I support abortion. Of course, anti-choice/anti-life attackers came to debate. I don’t debate online, especially on twitter, because it’s pointless. Same argument that has no legitimacy and what they were saying was not even relevant to what I said. Because of a serious family issue I was in no mood to argue. But now, I think I will sit here and write a nice rant for all to read.

Thought I’d try writing it out for you guys 🙂

I did not say the majority of pregnant women attempt suicide, I said, it saves women from it. END_OF_DOCUMENT_TOKEN_TO_BE_REPLACED