“Law enforcement agencies have failed to properly report police killings for an entire century, so why should the public trust them to do it now?”-Keep reading for source

Though I think is good, I also think it’s rather sad that the American Government cares so little they haven’t bothered getting around to even making it mandatory to report when a person is murdered by one of those in the department. Those beaten don’t receive any government notice, which is tragic as well because there are far too many disgusting instances of brutality and use of excessive force on humans of all ages; from young children to the elderly (stay tuned to my police brutality
/racism channel by clicking here as there will be a lot of videos posted up this weekend; many on this very topic).

ere is no place any of us can go to get a federal or even state record of how many people are murdered and/or beaten annually. One would think if the government cared about the people it would be mandatory for any and all law enforcement agencies to report any and all deaths which occur by one of their officers.

However, that is exactly the opposite of what goes on. In reality, it is an option for cops to report this. It only makes sense; they are the biggest gang in America; what gang speaks out against themselves?

Don’t forget who helps promote those lies; the media. News channels are not only

government controlled (as it was before the Senate Trials; now, why would they stop?) the government and corporate America go hand in hand. Together, with Fox News preaching lies and hatred towards Black people via the use of false images, false reports and inaccurately reporting police brutality, when they bother covering it period.

Lying for-profit media stations like Fox News only promote lies, racism and claim their lies to be not only news but truthful news; not opinionated but fact based which is a full blown lie. (Research it if you don’t agree; it’s not hard to figure out.) 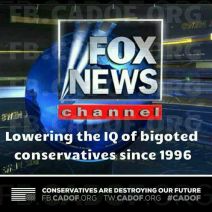 The government uses for-profit channels like Fox News to influence those who watch religiously. With the executive director of the National Association of Police Organizations has stated that he thinks what Harvard researchers have found to be “misguided”, adding

THIS IS WHAT SO MAN WHITE, RACISTS SHOUT; ARE THEY BLIND? ARE THEY TRULY SO STUPID THEY CANNOT SEE THAT NONE OF THE PEOPLE WE’VE BEEN FIGHTING FOR DID ANYTHING WRONG OTHER THAN BE BLACK AND BE ALIVE?! THESE COWARDS SHOOT BLACKS AND HISPANICS WITH THEIR HANDS IN THE AIR WITHOUT THOUGHT, REMORE, CARE OR CAUSE AND BECAUSE FOX NEWS FEEDS RACIST, DUMBED DOWN AMERICAN’S LIES; END_OF_DOCUMENT_TOKEN_TO_BE_REPLACED