“The simple statistic that 35 percent of our current farm labor force is made up of unauthorized workers points to a massive ripple effect in our agricultural economy and all that it touches (read: everything) were all those workers to magically disappear. But that’s the fairy-tale vision of the elimination of unauthorized labor. The reality is far messier, far more immediate, and far wider-reaching. Both authorized and unauthorized workers are affected by increasingly hostile federal attitudes to their labor…” – This information and documentation continues below, after a quick thought.

So, if you don’t think Trump and the immigration/refugee attack is important or that it will have no impact on you, your family or your life? Might want to rethink that after you read the following facts, with proof and back up evidence. The facts follow this little introduction of mine.
NOTE- I’m posting this as a side note; it is my belief it is the lives that matter most and should be of our utmost concern and importance. But in attempt to reach anyone inactive that may need “a little bit more” to care, and for those whom already care and simply seek information to add on to the reasons why the latest immigration policy -which is just as inhumane as his first- is a disgrace and threat to humanity.
Read about the posing terrorist threat to human life deemed “illegal” by clicking here.

Virtually all of the newly open agriculture jobs will pay poverty-line wages, and they won’t be opening up in the areas of the country where unemployment is the highest, as Alabama has proven. Unfortunately for anyone worried that unauthorized laborers are taking jobs away from citizens, that means that these open positions are unlikely to be filled — at least, not by currently unemployed American citizens. Otherwise, maybe Trump’s own winery wouldn’t have needed to request temporary worker visas for its employees.

In fact, it’s likely that Trump’s anti-immigration policies will result in even more jobs disappearing: As Kathleen Merrigan, executive director of sustainability at George Washington University and a former Deputy Secretary of Agriculture under Obama, told Eater’s Dana Hatic,

“Farmers, particularly those working in specialty crops, have already moved some of their operations outside of the country because they can’t find adequate labor.” Dave Runsten, policy director for the Community Alliance with Family Farmers, explained to Hatic that the effect of Trump’s immigration decisions will accelerate that process: “As wages go up and the availability of labor goes down … The largest farms will mechanize or move to Mexico or” — as at Trump Winery — “get Trump to let them import guest workers.”

Few more of my thoughts…

The American government of the “free world”… offering another look at what a true hypocritical country should be. America. Where we started out with vicious and sadistic abuse on the Natives and Africans and countless other nationalities by enslaving, following up with prejudice hate for anyone with Black or “dark” skin via further slavery under new names which are in effect to this very day via the police and prison industry (and school system but that’s for another time) and those are just a few examples of the continued racism which goes back centuries to the beginning of this country, and now includes anyone who do not hold a status of being truly “American”.

Yep, the good ol’ American government continues its legacy more blatantly and proud than it has in hundreds of years. This is just the beginning. When Trump said make Amerikkka great “again” he meant make it white and lazy again, but do it with a smile and pride for the other countries to see; screw hiding racism and prejudice behavior!
As this continues to progress from immigrants to citizens who are not white and/or rich, the more action you take now, the better chance we have of reversing and hopefully going down a NEW path for the first time in American HISTORY.

Sad something so obvious is amazing and wonderful… In the following tweet I link a video that shows what this CEO is doing to help homeless people eat, work and LEARN via vocational programs. They go out of their way to help give work experience and other aid to the homeless… Additionally,….The food is healthy food, served like you’d be served anywhere… 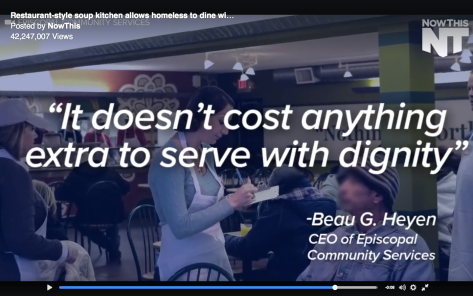 I love that quote… How true…. Additionally, there are no trays, no lines, none of what the regular soup kitchens tend to be like. More people with money should be reaching out like this… Everything does come down to money, and that’s a problem. – Video follows in link ->

so long as we have #homeless, this is how #soupkitchens should be run- with #respect, #humanity #kindness #CARE https://t.co/9TncWJH8qp

Watch the video by clicking the link above to see how the homeless are treated; fed and given a chance at this ‘soup kitchen’; they are treated like anyone else going out to eat…Exactly like the human beings they are. THE CEO HOPES TO EXPAND AND OPEN 5 MORE BY 2018. That is a real, respectable and good soul… Where are the rest?

What is wrong with this world; how can anyone be so cold as to turn down the simple act of giving and receiving respect, dignity, care and concern for fellow souls?

This life shouldn’t be about money. Yes, we need it, sadly. But making it all about the money, all about your ‘status’ or what you have…you are truly lost and need to do some soul searching, I’d say.

For those interested, here is a link to the above for more information and other resources -> click HERE.

Very interesting read. The below quote along shows us how sick and corrupted ‘people’ are to allow money to twist and pollute their mind, heart and soul enough to treat fellow humans so immorally; with such vicious malice and depravity.

“What these letters reveal, apart from a total lack of empathy for their human commodities is the sheer amount of money involved. Many anti-slavery campaigns were grassroots efforts by ordinary people, while the pro-slavery lobby had significant wealth and influence they could use to exert pressure on Parliament.” 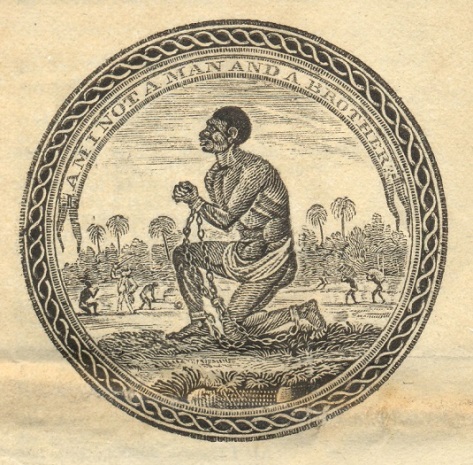 Earlier this month, St John’s College Library at the University of Cambridge, announced the acquisition of letters and papers revealing in detail how human beings were priced for sale during the 18th century Transatlantic Slave Trade. They are now available to researchers and the public. Special Collections Librarian Kathryn McKee reminds us that the 18th century letters provide “a distressing reminder of the powerful business interests that sustained one of the darkest chapters in British history.” Dr. Richard Benjamin, Head of the International Slavery Museum, points out that the letters are also part of a larger body of historical documentation that sheds light on resistance to slavery. Here are just a few excerpts; see the full article in the link below.

[. . .] Kathryn McKee, Special Collections Librarian, who acquired the papers, which were previously held in Derby County Records Office, said: “These documents provide first-hand evidence of the sale of…

How can anyone in hell think slavery is truly over?! This is typical of the prison industry; they send these poor guys to do the work that most professionals refuse to do for a good reason… When tearing down buildings if the place has problems with the gas lines or something equally as deadly and dangerous- they send for the prisoners…aka, new name for slaves. Not that the reason for going matters as how often do they, 40 or 60 years later realize that person didn’t kill ______ after all! Just want to point out another INJUSTICE fact about prisoners.
Overall, aprox 56% of all prisoners are in for drugs, only 3% average as being in for murder, 1% is rape. I’m shocked rape even made it on to the percentages but there we are.
We seriously gotta start doing something about this …

This baffles me… The only reasonable thing I can see in this argument is that it will give prisons and the government more incentive to go ahead with executions to obtain the organs. Who is going to question it, after all? They are just prisoners. Ugh, who can think like that?! Most of the people in prison are not in there for rape or murder but drugs! Thus, most the people in there, should NOT be in there so we can have room for the pedophiles and killers whom actually pose a threat to society.

One thing I would like to note, though, is before we lock people away for life for murders or anything else, they need to be damn sure they have the correct person! Not only does it leave the real problem still at large, but it also is punishing an innocent soul. If this guy actually did the crimes they claim he did, then I really have no interest in him. But if unproven, without a doubt, then how can I or anyone else damn a person to death or life in prison unless we know FOR SURE we are right, with NO doubt?

I think anyone who donates their organs after they’re gone is a blessing. However, because the prison is an industry looking for death and money, I can’t help but agree that it’s a bad idea and that these prisoners will be targeted, and sent to their deaths first.

The organization that coordinates transplants across the United States said Thursday that an offer by a death row inmate to donate his organs — which led Ohio’s governor to delay his execution — is “ethically troubling.”

“Allowing condemned prisoners to donate organs could provide an inappropriate incentive to execute prisoners and could lead to significant human rights violations,” said Alexandra Glazier, head of the ethic committee for the United Network for Organ Sharing.

“Any possibility that particular groups or individuals could receive death sentences to provide transplantable organs to the public would be completely objectionable,” she said in a statement.
END_OF_DOCUMENT_TOKEN_TO_BE_REPLACED

“The United States has about 5 percent of the world’s population, but we have 25 percent of the world’s prisoners – we incarcerate a greater percentage of our population than any country on Earth,” said Michael Jacobson (the director of the non-partisan Vera Institute of Justice, also running the NYC jail and probation systems throughout the ’90s.

Though we all know Facebook, in partnership with the government (and many others), monitor us and have been spying on innocent citizens via Facebook with the excuse that is for “national security” when actually it only really seems to aid in arresting people for things as insane as a teenager making a sarcastic remark to hunting down people who for using drugs.
END_OF_DOCUMENT_TOKEN_TO_BE_REPLACED