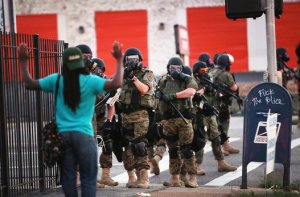 Key witnesses in Michael Brown’s case lied under oath, it’s been ‘revealed’… While this is nothing new and nothing surprising, I feel it’s important to make note of for those who have trouble understanding…

Just as important, please remember; this isn’t just one case. When I was doing police brutality work, one of my responsibilities was to locate lawyers for victims. In a couple of states and locations the lawyers straight up told me they were afraid to go up against the local police and advised I searched neighboring city and/or state lawyers.

That should be a huge red flag on its own. Articles and links follow:

A star witness in the grand jury case involving former Ferguson, Mo police officer Darren Wilson has been revealed to be a racist suffering from mental illness with a criminal past. Sandra McElroy known as “Witness 40″ has been a crucial part of Wilson’s claims surrounding the altercation between himself and Michael Brown. McElroy’s accounts of the events on Aug. 9, closely mirrored the ex-cop who shot and killed an unarmed Brown. The Smoking Gun is reporting McElroy’s story became very suspicious, due to END_OF_DOCUMENT_TOKEN_TO_BE_REPLACED

I’m exhausted, I’ve been working almost non-stop on a case for 2 days, so I’m going to take a few hours off here and rest; then I’ll be back to working on cases and sharing news. I’ll also be posting more on police murders and the following photo, which blows my mind but is not the first time something like this has happened. Whether you want to admit it or not, racism has only become covert in America; it has not gone away. 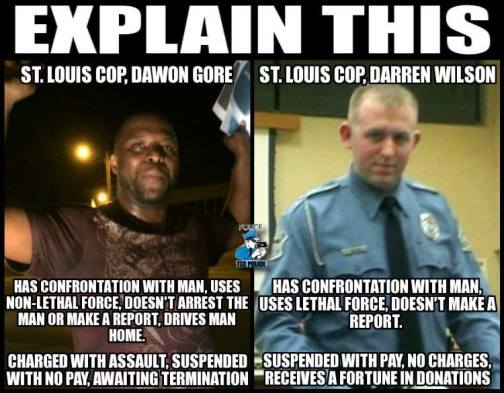 Quickly, I’m going to give a ‘preview’ of what facts, information, (including references & citations) regarding police murders globally, with America leading by a haunting percentage.

Sadly, the numbers for the United States also reflects Black teenagers are killed at a devastating 21 times more on average than white teenagers. You can say it’s not true because you don’t wanna believe it as much as you’d like but it is true, and shortly I’ll have detailed information and credible references posted.

Cops in England and Wales, for the whole of 2013, fired their guns fewer times than the proud child murderer Darren Wilson (he has chosen to resign since the murder; it’s good he is off the streets but he faces no punishment, not even a fine. Nothing.) Back to cops in England and Wales. Not only did they fire guns less at ‘suspects’, for the past two years they’ve gone without fatally shooting a “suspect”.

Here in the states, however, END_OF_DOCUMENT_TOKEN_TO_BE_REPLACED

I wrote a quick thought on twitter before coming here to write, but I think it sums up the point of this post… My tweet was nothing mind blowing, just straight to the sad, horrible truth. And I said:

#MichaelBrown murderer being let off didnt surprise me- since when are #police held accountable? look back through history, present &Distant
— Truthful Tragedy (@ApoeticTragedy) November 25, 2014

It is heartbreaking that yet another unarmed, young Black male, Michael Brown, an innocent teen with a promising future, was murdered by a police officer who not only has his life but his freedom as well.

Darren Wilson, a sick psychopath in my books, claimed Michael Brown as having a “crazy intent” to kill him. The problem arises here; Michael had no such goal. The media has hyped up any American it can on these lies, though. Watching Fox News they fuel the fire, making this innocent, unarmed teen into an evil wanna be murderer. The part that hurts the most is that so many Americans are dumb enough to believe this and other lies the For-Profit, government run media shares. Never do they do independent research. It’s all about what the good ol’ TV says.

The cop, as always, walked away; no punishment despite the witnesses and evidence. “I don’t have a gun, stop shooting.” … Michael Brown’s last words. How haunting… May his soul find peace on his next journey.

As tragic as this is, while this case has been going on, other teens and adults have been harassed and/or murdered by police. This is nothing new, and it will be nothing old if we don’t demand change.