*I’ve always been passionate about all dogs, especially pit bulls, but this dog was more than just a dog; I believe she was a part of my spirit. Long story short, she escaped where she was being abused and came to my house for some reason, and I

was on the edge myself. I found her, she was gentle and loving from the start; she had been severely abused and neglected. I worked with her for awhile and slow but steady she began to gain confidence as well as her wounds i would clean were healing. She is my angel on earth, and she is one reason I wrote this blog.

I can say with all honesty, nothing hurts my heart and soul more than seeing an innocent, defenseless or broken spirited soul either being hurt, previously hurt or fed up with living. I am extremely passionate about police brutality victims just as I am women who are verbally abused by zealots who ignore science and medicine (not to mention the concept of a woman having a life, or, giving a child a humane life). Those are only two issues that enrage me. Lies outrage me, and if you can handle reading the research, facts and statistics below, hopefully you’ll be just as out raged as I am.

It should go without being said, but, for sanity’s sake, one other of my passionate beliefs is standing up for the misjudging, mislabeling, selfish, heartless lies told and believed regarding Pit Bulls.

Personal experience, research, statistics all show there is such a deep misconception regarding these amazing dogs. That these dogs are vicious murderers is a horrible misconception being fueled by society, the media and further fueled by the people who watch for profit media, such as Fox News or CNN. One attack happens, it’s all over the news; Pit Bull Mauls Child! For-profit media are in constant competition with each other, despite being government owned.

The more horrific the story becomes; the quicker the race to get the most gruesome image quickens. If they have to exaggerate the stories a bit to get the incident more shocking, surely, that won’t hurt! In fact, it’ll probably boost the ratings so they exaggerate, even going so far as to labeling non-pit bulls, as Pit Bulls.

Actually, Pit Bulls are trained and used to help people with disabilities, much like Labs are famously known for. They also are trained to help school children who struggle to read out loud, develop this ability faster. When then Pit Bull was legal in England during the Victorian times, they were commonly referred to as “Nanny Dogs” because of their good temperament and their exceptional love and good behavior with children. In older Victorian photos and paintings Pit Bulls can even be seen in many family portraits and paintings.

This hasn’t changed; despite what the media tries to make us think with fear tactics. According to research and the infamous National Canine Temperament Testing Association, the Pit Bull scored second only to the Labrador, coming in with a score of 86.9 (the higher the score, the better the dogs temperament). See Infograph..

Another interesting point is the average temperament for all 231 breeds tested came in at 82.4%- Pit Bulls aren’t the problem. It’s the abuse and horrific trauma they go through because of HUMANS that is the real issue.

(If you google CIA declassified documents, you will find they aren’t even ashamed to admit that they do in fact own the media so what you see on TV is what they want you to see- does that not alarm you?)

Still, despite their owners chaining them up, starving, beating and forcing them to fight and maul others, the dog is being punished and judged incorrectly by too much of society; while

the real danger (the owners) are not treated as if they ran a red light.

All puppy’s will bite. You teach them not to, they are playing and do not understand that it can hurt. Just the same, any dog can be trained to be a cruel dog. But they aren’t cruel dogs; the dogs that have attacked humans were approximately 90% abused, neglected or so forth. But that does not mean that is the dogs natural nature. In fact, Pit Bulls are very well known for their gentleness with infants and children.

Despite the dog not being the criminal, the media wants you to think it is, and just mentioning a Pit Bull automatically makes certain people angry because of their ignorance. The media know this and feeds on it. Even though for every 1 Pit Bull who bites someone, there are over 10.5 MILLION that do NOT bite. But that’s never mentioned.

If a dog of any b 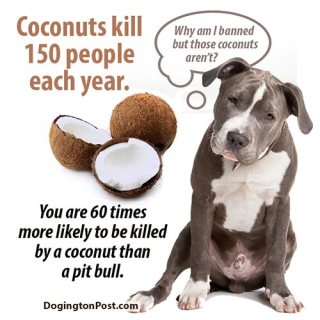 reed is brought up with attention, love and care it will be fine. It is when any dog (or animal) is neglected, abused or forced to fight that they become “dangerous”.

This is not the Pit Bulls fault; it is not the Bull Terrier’s fault (Bull Terrier: the breed of dog Pit Bulls belong to); it is the owner’s fault. Yet while these abused, neglected, starved, chained up, forced to fight others for, quote, “good money” end up getting sentenced to death, a ruined reputation and legal bans, the people that made them that way are let off with a slap on the wrist.

They then are free to go back out again, illegally buy and breed dogs to fight in a sick and selfish attempt to make money. But it is the dog that was breed and trained, forced to fight that the media is making out to be the criminal; when in reality that couldn’t be further from the truth. It is the people who own, train, breed and abuse these animal that are the REAL criminals.

But just like with laws regarding rape, child molestation, murder and the like, the criminal who trained these innocent lives to be angry fighters are also simply slapped on the wrist. I’d like to add a note here that a massive 86% of the federal prison population is made up of victimless crimes! The majority of prison cells, federal and state, are of drug offenders. Drugs is a social issue. It is a medical issue. It is not an issue that prison should deal with while allowing threats to society such as the above noted walk around freely.

This system is very twisted.

Despite dog fighting being a felony under both federal law as well as a felony in 50 states, one animal patrol officer told CBS 47 News getting in and saving these animals, stopping the fights and punishing the humans who caused the mess is, quote,

“harder to infiltrate than the Mafia”.

This is because animal activists are at known locations waiting, however, these criminals are well organized and prepared… Plus, I am going to assume the laws have technicalities that are not allowed to be broken when engaging in stopping dog fighting rings.

After football player Micheal Vick brought fame and attention to the topic of dog fighting back in 2007, the Animal Fighting Prohibition Enforcement Act was signed into law making dog fighting a felony under federal law. The punishment for turning sweet, loving animals into abused fighters is a maximum of three years in prison, and a maximum fine of $250,000. Three years is nothing, especially considering they won’t spend three years in prison, be it due to good behavior or a lesser sentence.

eople get more time in prison for, again, doing drugs. Drugs is not an issue that should be punished in prison; research and statistics show that community treatment programs have a massively higher success rate as well as a dramatically lower rate of re-offending. When put in prison for drugs, not properly helped, subjected to torment and other atrocities; what other choice does someone have when they get out? No one will hire them. The government won’t help them finance an education…

Yet, there is a ten years minimum for some drugs, and still far too harsh sentences for others, depending on the drug type. So while the rapists and murderers walk around our streets, creating a real safe society for everyone (sarcasm noted), someone is punished, locked away and left to suffer because of an addiction…Which needs medical attention, not a cold, harsh prison.

Seemingly that doesn’t matter, however. Again, over 86% of people in American’s Federal Prison System are of victimless crimes. They are not a danger to society. However – rapists, murderers, domestic abusers and animal abusers are all just slapped on the wrist and told not to do it again.

Which of course, they will not listen to.