Remember the man in the photo, Maurice Osbourne? He is the virtuous, honorable, gentleman, whom selflessly put his safety and life aside to protect a woman he didn’t know from being raped. Afterwards, when no one would assist him in escorting the sick pervert to the police, he did it by himself. He is studying to be a medical assistant, currently lives in a shelter in Brooklyn, and deserves so much love, respect and kindness given back to him. I say this as a female from NYC and as a survivor. Maurice Osbourne is a hero in my eyes. Below you’ll find his story, or you can find it in a previous post, located here.

Thankfully, another woman as thankful to this sweet, brave man as I am, wanted to do something nice for him. So she has started a GoFundMe page to help him get out of the shelter he is staying in and into his own place as well as pay his school debt and complete the rest of his education to be a Medical Assistant, Thus far $20,000 (give or take) has been raised. Every dollar counts, and if there is anyone more deserving of having something kind and heartfelt done for them, it is without a doubt Maurice Osborne. Click here to visit the GoFundMe page. Note: This woman did 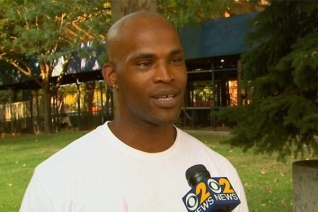 not have any knowledge or contact with Maurice until after hearing about his heroic actions.

“In response to his brave act of heroism and on behalf of all women everywhere this fundraiser is to aid Mr. Osborne in paying for his school tuition and all expenses related. All proceeds raised through this page will go Mr. Osborne. Pay it forward and reward his good deed.
About the campaign:
I am a volunteer on behalf of a group of New York women who read Mr. Osborne’s story and wanted to personally thank him for his courageous actions. We are all locally based and wanted to show our appreciation for keeping our commutes safer.

As a fellow Bed Stuy resident and active volunteer with multiple projects I felt compelled to support the people in my community.

Until this inception of this fundraiser there was no personal relationship with Mr. Osborne, however, now I am in contact with him and keeping him updated multiple times a day on activity and kind words shared.

What we raise is being spent to pay off his student loan debt of $2,500 from the first part of his medical assistant and to pay for the remainder of the tuition to finish his degree. This will also include his scrubs, textbooks, metrocard, and other supplies he may need. Past that what is raised will be put into a checking account for him to use for other expenses such as phone bill, or if we can raise enough, rent in a place of his own.

This money will be given directly to the school and the intuition that holds his loan. I will also personally help him set up a checking account, and find housing if need be. ” “

He initially heard her screaming, as 40 year old Alavro Dennica sexually assaulted her. As the train doors open the woman raced out onto the platform, the sexually deranged man chasing and then jumping on top of her.

As she was pinned down, the young woman was trying to let others know the pervert was trying to rape her. That’s all Maurice needed to hear. When those words came out of her mouth, he wasted no time. “I just reacted,” he told CBS2.

Maurice grabbed Dennica by the collar of his shirt, pulled him off and away from the woman he had assaulted and attempted to rape. He knew then that it was up to him to take the pervert to the police station. He was asked if anyone else was going to help the female he said a truth too many of us in NYC shouldn’t find surprising:

“Nope. I wish someone else did. I wish the conductor stayed. The conductor didn’t even stay. The train left.”

Maurice Osborne did the most noble thing he could have; he behaved as real men would act. Not only in protecting and saving the lady from further trauma; but upon seeing no one else willing to assist him in holding the sick predator, Osborne said he continued grabbing the man by his shirt and began pulling him up the subway station’s steps; across Flatbush Avenue to the 78th Precinct, where he turned the sexual offender over to police. It was no easy walk from the subway to the police station, however. Dennica tried to fight Osborne off, to no avail, but he did suffer wounds and had to receive  stitches.

But his physical wounds he seemed to shrug off, saying he would do it all over again. Men need to learn from him.

Osborune is 37 and currently living in a shelter in BedStuy, Brooklyn, as he studies towards a degree as a medical assistant. He told reporters:

“I like helping people. It makes me feel useful.”

He went on to say he hopes fellow New Yorkers will do as he did; follow his lead and help one another when help is needed. I love NYC and I love Brooklyn; but unless you’re from New York I don’t think you can truly appreciate what this man did. He did something even security guards or clerks behind bulletproof glass wouldn’t even do.

Here’s a prime example of failure not only on the part of New Yorkers but also on the MTA. Back in 2005 I rode the G train almost daily. One morning I woke up and heard on the news a woman had been riding the G train when a man started sexually assaulting her. She, too, ran onto the platform (at the train station I used to get off at for work) and begged the clerk/MTA worker inside the bullet proof token booth, with his door locked, to please let her in. Also, if I recall correctly, there may have been more than one MTA worker behind the locked doors as she continued to beg and plead for them to please let her in… Words fallen upon deaf ears.

Instead, the MTA worker(s) remained safe in their booth and pressed the “panic” button. In the meantime, the 21 year old female was raped within sight. I am not 100% sure but I believe he raped her more than once, but I cannot verify that. Even if it were only one time, that one time is horrifically traumatizing enough. Not to mention the sick and dangerously perverted actions of the rapist.

Of course The Transit Workers Union stated that the, “…clerk has no way of knowing if he’s being set up,” finishing up his support of the worker by saying transit workers aren’t police. Maybe not, but he had bullet proof glass, he had his booth and panic button, he was safe. Where as on the other hand, Maurice Osborne isn’t a police officer either, I am happy to say. He is a man who sincerely finds joy in helping other people and doing the right thing.

Point of that is, it doesn’t take a cop to save the day. It takes a strong, caring, concerned citizen who cares for others. Maurice is a true gentleman and good hearted soul, a strong and true man who wants to dedicate his life, even his career (medical assistant) to helping other people. He is the sort of man we need in this world.

Again, to donate to the cause of helping him finish school, pay off school debt and have a place of his own, please, please click here and share… Thank you!